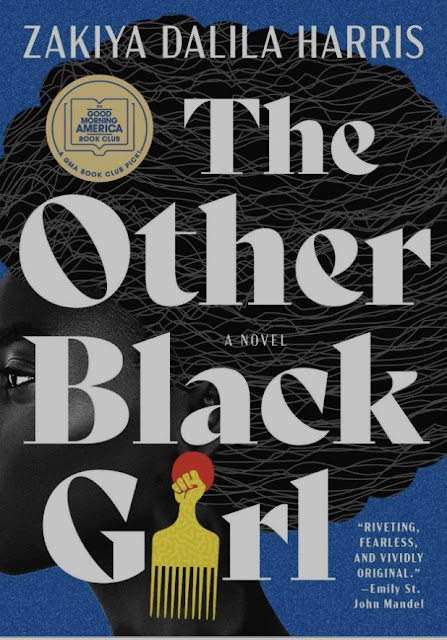 Nella Rogers is the only African American woman, in her mid-twenties, working at Warner Publishing as an editorial assistant.  Warner Publishing, located in Manhattan, is an old very prestigious, elitist, clique ridden  place. Most of the editors seem to come from old New York money.    A “great man” is at the helm, below him are several editors each with their assistant, all seem to be women.  Joining them are various other functionaries.  Nella wished there could be “another black girl” at Warner Books.

Nella has a white boyfriend and a best friend she talks about her job with. Nella comes from a comfortable middle class background.

Then one days she smells a hair product very popular among African American women:

“in the air near her cubicle. This meant one of two things: One of her white colleagues had started using Brown Buttah. Or — more likely, since she was pretty sure none of them had accidentally stumbled into the natural hair care aisle — there was another Black girl on the thirteenth floor.”

Hazel May-McCall is now The Other Black Girl at Warner Publishing. Hazel comes from a much wealthier family.  At first she wants to be friends with Nella, to learn all office infomation you don’t get during your human resources orientation.  The dream of every editorial assistant is to become an editor.  Soon Hazel begjns to undermine Nella while pretending  a growing friendship.  They seem to bond over a mutual preoccupation with hair care.

Numerous micro aggressions play out.  Nella’s editor wants her opinion on a famous writer’s , a white man, soon to be published book. Warner Books sees the book as a potential best seller.  The book centers on an African American woman, a crack head.  Nella has been asked to give her opinion.  In a meeting she comes close to calling the author a racist.  This causes a great uproar and the author stomps out of a meeting.

In the mean time, Hazel’s hidden agenda comes out in the open.

There are lots of sparkling moments, conversations and an ever deeping insight into what it is like being a “Black Girl”, with  the use of “girl” as a patronizing “Know your place”reminder. The characters are well developed and interesting.

I greatly enjoyed The Other Black  Girl.

ZAKIYA DALILA HARRIS spent nearly three years in the editorial department at Knopf Doubleday before leaving to write her debut novel, The Other Black Girl. Prior to working in publishing, Harris received her MFA in creative writing from the New School. Her essays and book reviews have appeared in Guernica and the Rumpus. She lives in Brooklyn.

A Good Morning America, Esquire, and Read with Marie Claire Book Club Pick and a People Best Book of Summer

It seems to be an almost impossible glass ceiling to break through. Judging from incidents taking place even now, it seems improbable that things will change.

Mel, this book sounds interesting on many levels! Excellent review.

Suko, thanks we have been in contact via our blogs over 12 years