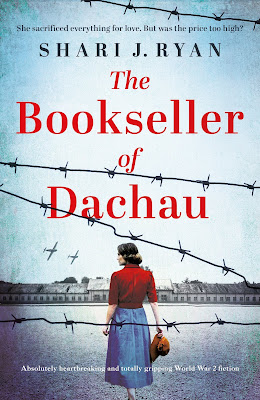 There are two closely related narratives in The book Seller of Dachau.  One thread is set in Germany in the 1940s, one in 2018 to 2019, starting in New York City and ending in Dachau.  The older plot line centers on a teenage girl,Matilda, in love with a Jewish boy.  The contemporary thread focus on Matilda’s granddaughter Grace, in her late twenties, single working as an architect in Manhattan who has inherited a book store in Dachau.

As the story opens, Grace has received a letter from a law firm in Dachau saying she has inherited property from her grandmother.  Grace is completely shocked.  Her mother arrived in  America as an infant with no papers about her family, sent to escape the Holocaust.

Grace decides on impulse to go to Dachau to learn more about her inheritance. It turns out she has inherited a book shop there from a grandmother of whom she knew nothing.

The story line then turns to 1939, Hitler is in power, spewing his hatred for Jews on the radio.  Her parents are not Jewish and have been friends for many years with a Jewish family renting another set of rooms in the same house.  Matilda falls in love with their son Hans.  One day his father is taken away while his mother and younger sister flea.  Matilda hide Hans in their attic.

Events alternate in chapters.  For Matilda her father commits an unforgivable act, tied into the family making Matilda Grace’s grandmother.  Matilda curses her parents and leaves on her own.  She goes to Dachau thinking Hans may have been taken there.  In a very moving sequence of events, she meets the owner of a bookstore there.  This will change  her life, Grace’s and even that of Hans.  The bookstore owner has a son who is a guard at Dachau.

2018, the bookstore is still open.  Grace cannot read and can only barely speaks German.  The book store’s manager, whose father became very close to Hans when both were inmates in Dachau, helps Grace read a series of letters Matilda wrote detailing her life.  They become close.  Grace relays her experiences to her best friend back in NYC.

The people in this work seem completely real.  The close was very gratifying to me in both time sequences.  It is an exciting very moving book.

“Shari J. Ryan is a USA Today Bestselling Historical Fiction writer. Her desire to write stories revolving Jewish livelihood during World War II stems from being a descendant of two Holocaust survivors. After the passing of Shari’s grandmother, she pursued an active interest in learning more about the inherited stories she yearned to understand better.

Shortly after earning a bachelor’s degree  from Johnson & Wales University, Shari began her career as a graphic artist and freelance writer. She then found her passion for writing books in 2012. In 2016, Shari began writing her first Historical Fiction novel, Last Words, a story about a lifelong journey through the eyes of a Holocaust survivor. With two character related books to follow, Shari quickly found a new passion to share untold World War II stories with a fictional setting. “ from sharijryan.com

I hope to read more of her work soon.

Her first book sounds like one that you will enjoy too: I look forward to hearing about it.