The Frangipani Tree Mystery by Ovida Yu - 2017- A Novel 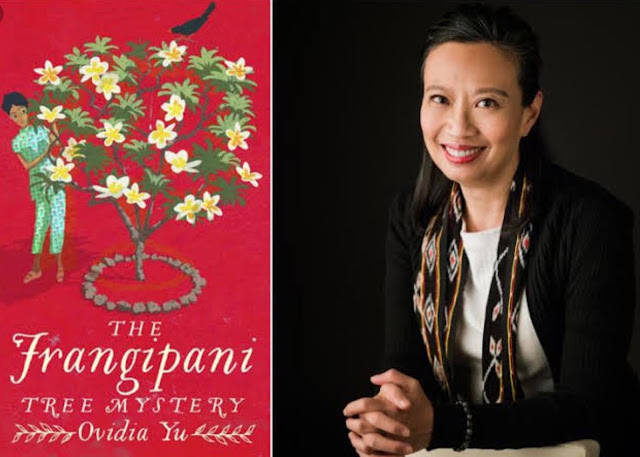 The Frangipani Tree Mystery by Ovida Yu - 2017- A Novel

Historical Fiction set in Singapore in 1936 with the English Still in Control but trouble coming soon.

Shu Li has just graduated from a Mission School. She is her late teens, her parents are deceased , she was raised by her grandmother and uncle.   Her uncle wants to marry her to one of his business associates, she wants no part of that. Her dream is to become a journalist. They get her a job with the Singapore Police Inspector as Housekeeper.

The Police Inspector gets her a job working for the acting Governor.  He has a 17 year old daughter with the mentality of a seven year old.  His son, his sister and his second wife, the first passed, also live in the Governor’s Mansion.  Charity, the daughter’s helper just died in a fall from an upper story window.  The Inspector General has been called in to investigate.  She has a cut in her side that arouses his suspicion.  From this a complex web evolves.

The novel deals directly with the attitudes  of native Singaporians of Chinese descent and the British to each other.  A good feel for colony life is devloped.

The ending is very exciting with Sin Li barely escaping being murdered.

The mystery drew me in.  My guesses about who the killer was were wrong.

Ovidia Yu is one of Singapore's best-known and most acclaimed writers. As well as award winning short stories and a children's book, she has had over thirty plays performed and is author of the Aunty Lee books, featuring a crime solving Tai Tai, and the Colonial Crime series set in Colonial Singapore” from Goodreads

I read the first two books in this series and especially like the setting. I recommend the series.