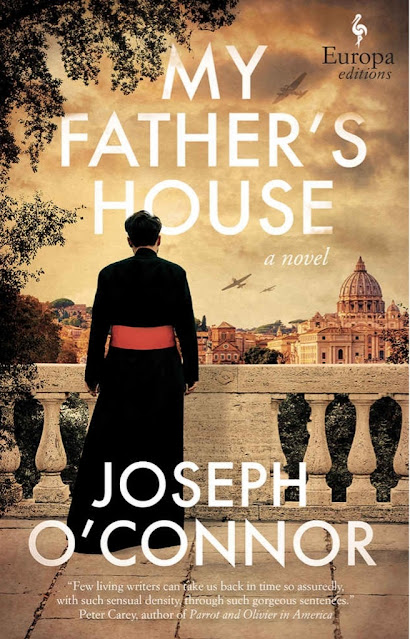 My Father's House by Joseph O'Connor - A Novel - forthcoming January  2023- 440 Pages
Set  in Nazi  Occupied  Rome  during September 1943 gestapo boss  Obersturmbannführer Paul Hauptman rules the city with terror and violence Hunger is widespread. Rumors fester. The war’s outcome is far from certain.
Diplomats, refugees, and escaped Allied prisoners flee for protection into Vatican City, at one fifth of a square mile the world’s smallest state, a neutral, independent country within Rome. A small band of unlikely friends led by a courageous Irish priest is drawn into deadly danger as they seek to help those seeking refuge.
Book 1 in the Rome Escape Line Trilogy, My Father’s House is a powerful, heartbreaking literary thriller based on the true story of Monsignor Hugh O’Flaherty, who risked his life to smuggle thousands of Jews and escaped Allied prisoners out of Italy under the nose of his Nazi nemesis. A deadly high-stakes battle of wits ensues in this astonishing, unforgettable story of love, faith and sacrifice, exploring what it means to be truly human in the most extreme circumstances
Having read four prior novels by Joseph O'Connor, i had high hopes for this work. I was certainly not disappointed . In addition to the plotline in 1943, there are segments set in England in 1963 and beyond, interviews with participants, a section of an unfinished memoir and an account of what happened to the Gestapo leader after the war.