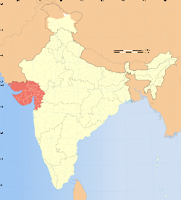 My recent venture into the South Asian Short Story, a now life time interest and permanent part of The Reading Life, has opened up many new exciting reading and learning windows for me.    There are dozens of cultures and languages just in India alone, each with its own literary tradition and its own relationship to the English literary tradition.    I am partially finding this a bit overwhelming but I am taking it one story at a time with each work read leading me to the next one, hopefully with a greater appreciation and understanding as I go along.    Stimulated by claims of other bloggers that some of the Caine stories (and the whole Caine enterprise by some) are "poverty porn" I wanted to look at some short stories by people born into the Dalit (Untouchable) caste from the Gujarat region of India that portray the life experiences of the most poverty stricken people in India, some 165 million.    I choose stories from this part of India because there are two brilliant editions of Muse India (2007) that focus on Dalit Literature from the Gujarat region (North Western) of India.  (There is a good background article on Gujarat here)


"A Brief Introduction to Dalit Literature" by Meena Kanasamy  is an excellent place to start.    She is the editor of The Dalit, is an award winning poet, a translator of numerous works on Dalit studies into English, has a PhD in linguistics, and was a writer in residence in 2009 at the University of Iowa International Writers Program.   She is very active as a political writer and speaker in the area of Dalit and Women's rights in India.   I want to quote a bit from her essay (which you  should read if you are at interested in the concept of "poverty porn"-here is the link  She has a very interesting blog that I now follow.)


"A Brief Introduction to Dalit Literature (by Meena Kanasamy)
Mahatma Jotirao Phule was the first to use the word Dalit in connection with caste. However, the word Dalit came into popular currency with the advent of the militant Dalit Panthers. In Marathi, the word Dalit means ground crushed, broken down and reduced to pieces. This name was chosen by the group itself, and it contained in it an inherent denial of pollution, karma and caste hierarchy. The Dalit Panther movement, was a self-conscious movement among the ‘Depressed Classes’ who sought to follow the militant and revolutionary Black Panthers of America. Dalit literature grew out of the Dalit Panther movement which was established by two writers Namdeo Dhasal and Raja Dhale in April 1972. Like Black Literature, Dalit writing was characterized by a new level of pride, militancy, sophisticated creativity and above all sought to use writing as a weapon.

Today's Dalit Literature that occupies a pride of place is actually born out of the heinous system of untouchability and caste discrimination that have been practiced in India for the past millennia....


Dalit writers were quick to point out that the 2000 year old history of oppression has not been documented at all: it is a literal holocaust that has slipped by without being put into words!


Marathi Dalit literature is the forerunner of all modern Dalit literature. It was essentially against exploitation, and made use of writing as a method of propaganda for the movement. It was not immediately recognized by the mainstream which was obsessed with middle class issues."
.


I think we can see from this that one can write literature about the experiences of the very poor that does not simply pander to the needs of richer readers.   All three of the stories I will briefly post on today were written by people of Dalit backgrounds (someone correct me if this is wrong please) who have educated themselves.   (Two of the authors are Medical doctors).   All of these stories have been translated from Gujarati.    As I read these stories,  I thought of Frank O'Connor's central thesis in The Lonely Voice: A Study in the Short Story that short stories are about people in "submarginal groups", those who have no one to speak for them.    (O'Connor's book has some real flaws but is also flat out the best thing written on the short story as a literary genre.)    The Dalit of India are are 165 Million people who fit (or did)  this idea perfectly.


Dalit's were only allowed to do the most undesirable kind of work.   For 1000s of years it was illegal for them to learn to read and write.    Much of their work was devoted to waste disposal and the cleaning of toilets.  (Imagine 600,000,000 people with no access to toilets with sewers and you see the immense amount of very hard, very nasty, unhealthy and dangerous work to be done.    This is a long way from Ballywood.    Dalit  women were widely employed as toilet cleaners.   There lives were shortened by diseases and they suffered terrible abuse by their husbands and worse if widowed or abandoned.

"The Hell" by Dharmabhai Shrimali is about a woman teaching her daughter how to go from house to house picking up what ever needs to be disposed of.   Human waste was placed in a tin can, often a leaky one.     In a very well done scene the mother tells her daughter she will not be well received by her future mother in law if she is not used to picking up rotten carcases of dogs and cats.    The only life the daughter can hope for is to marry into another Dalit family and slave away as a garbage woman until she is old enough to be a mother in law herself (if she is lucky enough to make it to that age.)   "The Hell" lets us see for ourselves what the lives of the people in this story were like (You can read it Here)


"The Flame" by Harish Mangalam is an interesting story that gives us some insight into the kind of medical care Dalit people received.    It is kind of in the form of a rant of an older man about the inability of doctors to cure his eczema.   It is interesting and his cynical observations about the financial motivations of the medical establishment were really spot on and funny.    Mangalan is the General Secretary of the Gurarat Dalit Association, a government official, and the author of numerous works of fiction, essays and translations.  You can read "The Flame"  HERE.


"Untouchables" by Chadu Maheriya is a near heartbreaking story.    Those of us interested in post-colonial literature need to stop for a moment to reflect that in the case of the Dalit people of India, a horrible institutionalized millennium old form of internal colonization was in place when the English arrived.   This story deals directly with the lives of female toilet cleaners.   To put it mildly, there is deep sadness in the idea that for 1000s of years millions of seven year old girls knew they were going to grow up to be toilet cleaners just by an accident of birth.   When very lucky, they will be married into another Dalit family where people work together to survive.   With all to common bad luck, she will be abandoned or widowed with children at a young age and considered little better than a "public woman" (a term I learned in The Man Eater of Malgudi by R. K. Narayan).   Mahariya is a government official in Gujarat, the editor of a well known collection of Dalit poetry and an anthology of memoirs of Dalit mothers.    "The Flame" can be read HERE.

I haven't read the African stories that you've been writing about, so I cannot tell. But I do know that the stories I've read by writers who speak of the poor or the rural people, do so to bring things out into the open - most often these people write in their own mother-tongue. I think that alone should tell us they aren't writing to sensationalize but to vocalize.

I'm not sure if this makes sense, since my opinion on the issue is still half-formed, but it seems like one of those things where the the charge might have some merit sometimes, the danger is that it could very easily have a chilling effect that prevented issues that needed to be raised from every seeing the light of day.

Interesting blog.I do not know if Chandu Maheria's 'untouchable' is published anywhere.I have translated his biographical piece entitled 'Mayors' Bungalow' which was published on my blog http://gujaratidalitsahitya.blogspot.com/