Behind the Beautiful Forevers: Life, Hope, and Death in a Mumbai Undercity by Katherine Boo

Behind the Beautiful Forevers:  Life, Hope and Death in A Mumbai Undercity by Katherine Boo  (2012, 288 pages) 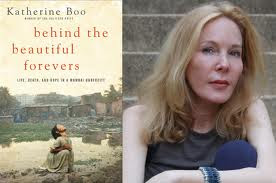 Behind the Beautiful Forevers:  Life, Hope and Death in A Mumbai Undercity by Katherine Boo won many awards, including the National Book Award.  It is a work of non-fiction about life in a slum in Mumbai by a Pulitzer Prize winning writer from The New Yorker.

I was totally captured by this brilliant deeply researched and shimmering work.  I really am at a loss as to how to properly praise it.   Boo spent about three years getting to know in as much depth as an outsider could some of the residents of a slum in Mumbai, I confess I prefer the name  "Bombay".

My blog has lots of very much cherished readers from Mumbai, a fact of which I am very proud.  I have read several very good novels set in Mumbai which helped me to get a small understanding of the city.  I also live in a huge subtropical Asian mega-city with teeming slums with lots of from the small villages of the country residents.  Many of the conclusions and profound observations of Boo could apply direct here.
Everyone who has posted on Boo's book says the people in the book are as well developed as those in the highest quality contemporary fiction.  I totally agree.

It is a common place in the west to look at the death rates in the slums of Asia and say something like "Oh those people do not value human life as much as we do because there are so many of them and because their religion teaches them resignation to their fates."   People who espouse right wing political views will go on to suggest the people in the slums are just lazy and have bad morals.   Liberals will give them some money.

I cannot see how anyone who reads Boo's book will every think that way again.  Among many other things it is an amazing account of how the lives of the people in the slum, what they must endure to survive, does gradually erode their capacity for empathy and moral behavior.  She lets us see the deep way in which corruption pervades Indian society and we see the total indifference of the richer people in the society to those at the bottom.

Boo follows the lives of several people in this story.   I was so happy to see what did not happen to one family I almost yelled out in joy.

In an after note Boo explains why she wrote this book and the difficulties she faced as an American who did not really speak the languages of the people she was writing about.

I thing this book is destined to become a classic work about Indian society.

Katherine Boo is a staff writer at The New Yorker and a former reporter and editor for The Washington Post. She learned to report at the alternative weekly, Washington City Paper, after which she worked as a writer and co-editor of The Washington Monthly magazine. Over the years, her reporting from disadvantaged communities has been awarded a Pulitzer Prize, a MacArthur “Genius” grant, and a National Magazine Award for Feature Writing. For the last decade, she has divided her time between the United States and India, the birthplace of her husband, Sunil Khilnani. This is her first book.

This book is on my reading list and it looks amazing!! I am fascinated by Indian culture. Nice review.

I'd like to read this myself. It reminds me a bit of Shantaram. It was an excellent book on modern day Mumbai.

Thanks for reminding me. I look into Amazon UK and found this for £1.59. I would be silly to miss the boat, so I bought it.

Mystica-thanks for your reading suggestion. I will research it

I have this on my to-read list. It sounds so timely and about a subject that is difficult to look at, and written sensitively. Your review is good and I like how you write about how you got involved in the lives of the people she writes about.