"Bloodchild" can be read here

Webpage of The Huntington Library (keeper of The Octavia Butlef Archives) 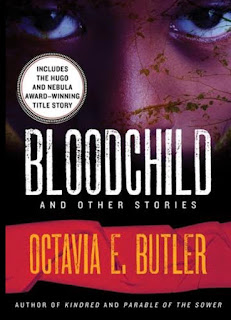 It is funny how on a Tuesday you have never even heard of a writer and by Friday you have her placed on your read all I can list along with Joseph Roth, Clarice Lispector, R. K. Narayan, Irene Nemirosky, all writers I would never have read but for my participation in the  international book blog community, the world's best readers.

After reading Science Fiction classic
The Way Station by Clifford Simak (in the long ago I was a big reader of Sci Fi but I stopped nearly three decades ago so I know very little about writers who have come (and in some cases gone) in the last three decades.  My research indicated Olivia Butler (1947 to 2006, born in the Los Angeles, California area in 1947 and died in 2006 in Lake Forest Park, Washington after a bad fall), winner of every award in the genre including the Hugo and Nebula Awards was a writer I wanted to check out.  As I researched her (primarily on the links above) I read she was an extreme devotee of the reading life.  Like many of us, Butler came to love reading as an escape from a world in which she did not feel comfortable, a very shy child, books were her friends.  Not only did Butler have serious commercial success she is now avidly studied by academics.  (Just take a quick look at the web page for the Olivia Butler society to see the various ways in which her work is now being mined.)

I looked for a work by Butler I could read online, I located only one, Bloodchild".  I found it was

I was captivated and gripped  by "Bloodchild" in the first paragraph in which a human girl, maybe in her early teens is laying in the arms of a human size very intelligent insect like creature, on a planet far from her ancestors home on earth and far in the future.  It is not a sexual embrace but more a maternal protective embrace.  The girl is quite comfortable with this.

Long ago the ancestors of the girl had left Earth, where they were mistreated, settling on planet compatible to their life support needs.  The planet was home to Tics.  In order to reproduce Tics must implant their eggs in a host animal.  Once the humans arrived they were found to be ideal hosts for the eggs.  The Tic created a protected preserve for the humans, took care of them.  Many Tics bonded with particular humans and became sort of family members.  Tics fed and watched over their human families.  There was a very big negative to being implanted with Tic eggs.  Once the eggs hatched they would eventually begin to eat through their host as they made their way out.  In one vivid scene, the hatchlings have to be cut out of the man in which they are implanted.  The story is narrated by the girl's brother.

I really don't want to give out much more of the plot of "Bloodchild".  (Reading time easily under thirty minutes.). I think it would be a great classroom read, stimulating lots of discussion.


Butler is now firmly on my read all I can list.

I thank Buried in Print and Fred for remarks on Octavia Butler (in the comments on my recent post on Way Station).

Wikipedia has a decent article on Butler and one on "Bloodchild".  In 1995 she became the first

Have you read Butler?  Please share your experience with us.

Do you have a favorite Science Fiction writer.?

Many academics call Butler an "Afro Futurist Writer".  Are you comfortable with labels like that?