A few days ago, inspired by an essay by Zadie Smith, I made my first venture into the fiction  of Octavia Butler (1947 to 2006, multi-awarded American Science Fiction writer), Bloodlines.  This Hugo and Nebula Prize Winning Novella about human alien relationships was so good I wanted to read more of her work.

I decided to next read her very highly regarded and commercially very successful fantasy novel, Kindred.  The plot description of a modern African American woman who involuntarily time travels back to a slave plantation in the old south in 1816 sounded very interesting
and most reviewers seem to love Kindred so I hit the "Buy Now" button and it was on my E Reader.

Kindred begins in Los Angeles, California in 1976.  Dana is an aspiring writer married to Kevin, a white man, who is a commercially successful writer.  They met working as temporary employees doing inventory at a big auto parts place.  They bonded though their love of books and their interest in pursuing a literary career.  They are maybe 27 or so.

One day Dana feels dizzy, she wakes up in Maryland, on a plantation by a river where a young boy, the son of the plantation owner, is drowning.  She rescues him and is completely shocked when he calls her a "nigger" and asks her who owns her.  The young boy says she "talks funny", she realizes somehow the boy is one of her ancestors.  Of course she is terrified to be on the plantation in these times, has no idea how she got here.  She witnesses a slave being beaten for attempting to run away, savaged by the boy's father.  She is transported back to her home in California, she is covered in mud, Kevin says she was only gone for two minutes but it seems like hours to Dana.

In all Dana time travels six times, she learns she will somehow go back when she is in mortal danger.  Dana experiences the cruelty of slave life when she is beaten with a bull whip, nearly raped by a white slave catcher who thought she was a run a way, sees children sold away from their mothers so the plantation mistress could buy some new furniture, works under backbreaking conditions in the field (house slave had in better than field workers) and witnesses her own foremother, a freed slave, forced into concubinage status to the young boy, now grown, she saved long ago.

Kindred is not just about slavery in America, it is about the marriage of Dana and Kevin, both their parents opposed the mix race marriage.  Dana loves reading and is into the reading life (as was Octavia Butler) with her husband.  When she returns beaten she fears if she goes to a doctor they will think Kevin did it and if she or Kevin tell the real story, they will be thought crazy.

There is much more in Kindred than I have touched upon.  It is so exciting and more than a bit frightening to watch Dana's life on the slave plantation.  In one episode Kevin goes with her, five years pass but when they return only a few days have passed.  Kindred is beautifully narrated.  We see the kitchen slaves eating table scraps, the slaves informing on each other to curry favor with the master, get to hate the owner's wife who has to pretend she does not notice the slave children who resemble her husband.

Kindred would be a great class room book, in the hands of a skilled pedagogue.

I have added Olivia Butler to my "read all I can list".  I will next read her futuristic Lilith Trilogy.

Please share your experiences with Olivia Butler with us. 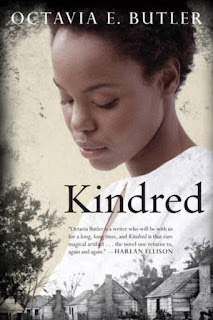