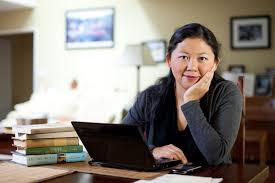 Yiyun Li grew up in Beijing and came to the United States in 1996. Her debut collection, A Thousand Years of Good Prayers, won the Frank O'Connor International Short Story Award, PEN/Hemingway Award, Guardian First Book Award, and California Book Award for first fiction. Her novel, The Vagrants, won the gold medal of California Book Award for fiction, and was shortlisted for Dublin IMPAC Award. Gold Boy, Emerald Girl, her second collection, was a finalist of Story Prize and shortlisted for Frank O'Connor International Short Story Award. Kinder Than Solitude, her latest novel, was published to critical acclaim. Her books have been translated into more than twenty languages.
Yiyun Li has received numerous awards, including Whiting Award, Lannan Foundation Residency fellow, 2010 MacArthur Foundation fellow, 2014 Benjamin H. Danks Award from American Academy of Arts and Letters, 2015 Sunday Times EFG Short Story Prize, among others. She was selected by Granta as one of the 21 Best Young American Novelists under 35, and was named by The New Yorker as one of the top 20 writers under 40. She has served on the jury panel for Man Booker International Prize, National Book Award, PEN/Heminway Award, and other. She is a contributing editor to the Brooklyn-based literary magazine, A Public Space.
She lives in Oakland, California with her husband and their two sons, and teaches at University of California, Davis.  from yiyunli.com

My Posts on Yiyun Li

"Sweeping Past" on The Guardian


Yiyun Li is one of my favorite contemporary writers.  I have posted on both of her novels and her profound memoir Dear Friend I Write From My Life to Yours as well as several of her beautifully crafted short stories.

My main purposes today are to journalize my reading of "Sweeping Past" and to let anyone interested know that the story can be read online on the webpage of The Guardian.

"Sweeping Past", set in China, is a fifty year look back on the lives of three girls who became "sworn sisters".  The practice was looked down upon as feudal in Maoist China.  The times were to turn ugly as a hatred for anything that seemed "western" or capitalistic became despised.

The women are now in their early sixties.  China has largely become a capitalist country.  A granddaughter of one of the women, her parents emigrated to Portugal long ago and own a very prosperous Chinese restaurant, is back in China for a two week vacation.  She learns much about the family history of the girls, a grandson of one raped and murdered the daughter of another, not wanting to wait for their intended marriage for sex.  He was executed.

I don't want to tell more of the story.  You can read it in ten minutes or so.  Li is a master at the depiction of the passing sweep of time.