A Snowy Night on West Forty-Ninth Street by Maeve Brennan 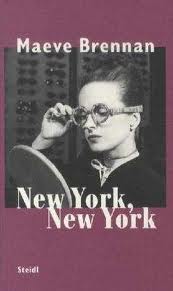 If you are interested in participating in Irish Short Story Month, please e mail me.

I first became acquainted with the work of Elizabeth MacDonald when I read her brilliant collection of short stories, A House of Cards.  A House of  Cards  was listed for the Frank O'Connor Prize in 2007.   It is a beautiful work set mostly in the Tuscany region of Italy.

My post on A House of Cards is here.

Q and A Session with Elizabeth MacDonald (I strongly urge you to read this.)

Elizabeth MacDonald was born in Dublin, where she studied Italian and Music at UCD. In 2001 she completed the M.Phil in creative and Music at UCD. In 2001 she completed the M.Phil in creative writing at Trinity College, Dublin. She teaches English at the University of Pisa, where she lives with her husband and son. Her translations of the short stories of Liam O'Flaherty were the first in Italy. She has translated the poetry of Dermot Healy, Seamus Heaney, Brendan Kennelly, Dennis O’Driscoll, George Szirtes, Derek Mahon, and Old Irish nature poetry. She has a special interest is the poetry of Mario Luzi. Her translations have appeared in  many journals, including Modern Poetry in Translation, Poetry Ireland Review, The Cork Liteary Review andSoglie. A House of Cards was first published by Pillar Press in 2006 and a second edition will be published by Portia Publishing later this year.
“This is a tender, understated and beautiful collection of stories that will leave you longing for more. ” Emma Walsh, The Irish Book Review.

Today she has favored us with her thoughts on the work of another great Irish woman writer, who like herself, spent much of her life outside of Ireland, Maeve Brennan.

Reading this story is like being able to enter into a painting by Hopper, one of those late night scenarios with people in their solitude etched against a background of hotel rooms or diners. The narrator opens the story with a detail, it has snowed, and then tells us where we are – Broadway. The detail is in the past tense, while the setting is in the present. This juxtaposition is maintained for the whole story, giving it an otherworldly dimension as, like the snow hovering over the city, it fluctuates between a narrated event and the universality of experience:

It snowed all night last night, and the dawn, which came not as a brightening but as a gray and silent awakening, showed the city vague and passive as a convalescent under light fields of snow that fell quickly and steadily from an expressionless heaven.

The narrator then tells us that the area where she (I’m presuming it’s a ‘she’) lives near Broadway “seems to be a gigantic storehouse of stage flats and stage props that are stacked together as economically as possible and being put to use until something more substantial can be built, something that will last.”


This sets the tone of quiet regret that permeates the story, an over-riding sense of impermanence, a solitude so immense that it reduces one to invisibility:


… there are times, looking from the window of the hotel where I live at present, on West Forty-Ninth Street, when I think that my hotel and all of us here on this street are behind the world instead of in it.

Waiting in the wings of existence. But something stirs her as she looks at the snow-covered city and she heads out to her usual restaurant, the Étoile, for dinner. She shows us the macrocosm of the city, then reduces the visual to the area around Broadway, and finally she settles us in with her to the microcosm of the almost empty, snow-bound restaurant.
There is an elderly Frenchman who comes to be able to listen to and speak French; Robert, a waiter; Leo, the Dutch bartender; Mees Katie, the French owner’s daughter; three businessmen from the suburbs, stranded in town; Michel, another foreigner, who imports foreign movies; a newcomer, the stout middle-aged Mrs. Dolan; Betty, a young woman who has moved to New York; and the shadowy, reticent narrator.
Whether the characters are there by chance or because they are regulars, none of them really knows anyone else. They move self-consciously within the restricted space of the restaurant, saying lines to each other in a vain attempt to while away some time and stave off the loneliness. None of them really seems inclined to move beyond the superficial, each in his or her own way, rebuffing more meaningful contact. The narrator remains at a remove even from this impoverished form of communication, noting with a certain approval the silence that falls between Mrs. Dolan and Betty: through it they move beyond the shame of the gaping need for company that manifests in vacuous chatter. The silence forms an intangible bond between them.
The theatrical metaphor is continued especially with Michel, who is partial to making an entrance and even more dramatic exits. He plays his part, recites his lines, while flitting between Mees Katie, Mrs. Dolan and Betty. But his most important communication is with the telephone, for business matters.
Eventually the narrator returns to her empty hotel room. And here, in the hushed darkness of a snowy night in New York, the Joycean note is becomes clear. Miss Kate and Miss Julia’s Christmas party has been given an ascetic New York setting in the Étoile with Mees Katie, and the snow “that was falling on every part of the dark central plain, on the treeless hills, falling softly on the Bog of Allen and, farther westward, softly falling into the dark mutinous Shannon waves”, now falls on this city of giant skyscrapers. The narrator looks out her window at the foggy skyline, her eye passes over what is visible and invisible under the covering of snow, buildings reduced to geometric forms, the street emptied of people - everything transfigured in this shroud of snowy silence:
I pushed open the window. The cold air rushed in, but no noise. What sound there was was drugged, as though I were a hundred floors above the street instead of only eleven floors. The wind had died down, and the snow fell thickly, falling in large, calm flakes.

My great thanks to Elizabeth MacDonald for sharing her thoughts on Maeve Brennan with us.

My posts on Maeve Brennan are here

Hi Mel my interest as you can probably surmise, is there any poetry collections available?