“The Boatman” - A Short Story by Billy O’Callaghan from his collection, Ths Boatman and Other Stories, 202 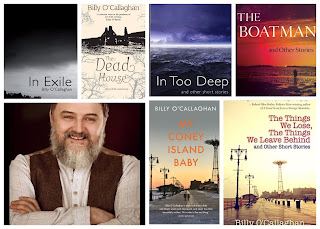 “The Boatman” - A Short Story by Billy O’Callaghan  -from his collection, Ths Boatman and Other Stories, 2020

Before speaking about “The Boatman, one of the best stories about dealing with death I have ever read, I want to share my thoughts on one of his prior collections, In Exile and his debut novel The Dead House.

In Exile and other stories

This is the second collection of short stories by Billy O'Callaghan, Cork City, that I  posted on during ISSM3.  I would not have read a second collection if I did not greatly admire the first one, In Too Deep and other short stories (my post is here).    The only book on the short story worth buying is The Lonely Voice - A Study of the Short Story by another man from Cork, Frank O'Connor.  The main contentions of O'Connor was that the modern short story is uniquely, as distinct from novels, about sub-marginalized groups, people who have no one to speak for them.  He also said the short story as a literary genre is uniquely fit to portray loneliness.  I will let more erudite people than I debate whether O'Connor was right or not.  I suspect it is an unresolved dispute but for sure his claims are interesting and illuminating.  O'Callagan's stories are totally in the tradition of the works O'Connor talks about in his book.  In the  stories I will talk about we have an unwed homeless teenage mother, a professional killer, a forty year old fisherman living  alone on a small Irish island, a musician  headed for an early death from heroin, an old man living for his next glass of whiskey, and  a thirty year old man leaving his Irish home tomorrow to work in London know he will probably never see his father again.


The Dead House opens in a fashion that evokes centuries of Irish literature, with the narrator announcing in the prologue that he has a long kept story emerged in his consciousness, he hoped he would never feel he must tell the story but now years later he knows he is so obligated.

I found the novel immensely captivating for the very visual and mesmerising descriptions of the West Coast of Ireland, dramatic cliffs and isolated villages, the character of the narrator, Michael, a successful happy in  his work fine art dealer, his wife Alison, their poet friend Liz, and the very intriguing a bit fey painter, Maggie, a long time client of Michael.  The characters are very subtlety developed, O’Callaghan draws us into understanding them.

“The Boatman” is one of the very best works I
have read about dealing with the death of your child.  Like many in today, I am being swamped by news of the Corona Virus.  The daughter died of a virus. I have three daughters.

As The Boatman” opens, the young daughter of the narrator has just died.  His wife is prostrate with pain.  He knows he should comfort her but he cannot find the strength for this.  Set in West Ireland, his brother is approaching the house to help dig her grave.  The narrator is thirty, a fisherman.  From his account of thirty being middle aged in Ireland and of the impact of hard physical work on his brother and father, I had a sense of how privileged I am.

The narrator all his life has been sustained by reading.  He has been reading since a child.  No one has directed or guided him. He always as a book with him, even on his fishing boat.  His reflections on his reading history are very moving and profoundly rendered.

There is another boatman in the story, from a story, a Chinese fisherman who lost his young daughter.  We are there at the burial.  You really need to read this story.  I saw a man without a huge amount of formal education, connecting to ancient traditions far from the doctrines of the Catholic Church, trying to find how to keep going.

There are eleven other stories in The Boatman and Other Stories.  If I can I will feature one more this month.  For sure in 2020 I will read the full collection and post  on the stories.

The collection will be available as a Kindle on April 28.  If you love short stories, I urge you to acquire this book.

“A master of the short story.”
John Banville, Irish Times Books of the Year
The Boatman and Other Stories is Billy’s latest short story collection.
“In these twelve quietly dazzling, carefully crafted stories, Billy O’Callaghan explores the resilience of the human heart and its ability to keep beating even in the wake of grief, trauma and lost love.
Spanning a century and two continents – from the muddy fields of Ireland to a hotel room in Paris, a dingy bar in Segovia to an aeroplane bound for Taipei – The Boatman follows an unforgettable cast of characters. Three gunshots on the Irish border define the course of a young man’s life; a writer clings fast to a star-crossed affair with a woman who has never been fully in his reach; a fisherman accustomed to hard labour rolls up his sleeves to dig a grave for his child; a pair of newly-weds embark on their first adventure, living wild on the deserted Beginish Island.
Ranging from the elegiac to the brutally confrontational, these densely layered tales reveal the quiet heroism and gentle dignity of ordinary life. O’Callaghan is a master celebrant of the smallness of the human flame against the dark: its strength, and its steady brightness.”
The Boatman and Other Stories will be released by Jonathan Cape on the 9th January 2020, and will be available in the UK, Ireland and the Commonwealth from Amazon, Hive, The Book Depository and Waterstones.
In the US, it will be published by Harper Collins on the 28th April 2020, and is available for pre-order now from Amazon, Apple Books, Barnes & Noble, Books-a-Million, HarperCollins, IndieBound and The Book Depository.

“Billy O’Callaghan was born in Cork in 1974, and is the author of three short story collections: In Exile (2008, Mercier Press), In Too Deep (2009, Mercier Press), and The Things We Lose, The Things We Leave Behind (2013, New Island Books, winner of a 2013 Bord Gáis Energy Irish Book Award and selected as Cork’s One City, One Book for 2017), as well as the bestselling novel The Dead House (2017, Brandon/O’Brien Press and 2018, Arcade/Skyhorse (USA)).
His latest novel, My Coney Island Baby, was published by Jonathan Cape (and Harper in the U.S.) in January 2019 to much acclaim.

Billy’s latest short story collection, The Boatman and Other Stories was released in January 2020 (and will be released in the U.S. in April 2020).

Billy is the winner of a Bord Gáis Energy Irish Book Award for the short story, and twice a recipient of the Arts Council of Ireland’s Bursary Award for Literature. Among numerous other honours, his story, The Boatman, was a finalist for the 2016 Costa Short Story Award, and more than a hundred of his stories have appeared or are forthcoming in literary journals and magazines around the world, including: Absinthe: New European Writing, Agni, the Bellevue Literary Review, the Chattahoochee Review, Confrontation, the Fiddlehead, Hayden’s Ferry Review, the Kenyon Review, the Kyoto Journal, the London Magazine, the Los Angeles Review, Narrative, Ploughshares, Salamander, and the Saturday Evening Post.”

I see coming great success for Billy O’Callagan, I see major prizes and movies.  I am proud to have been following his work for so long.