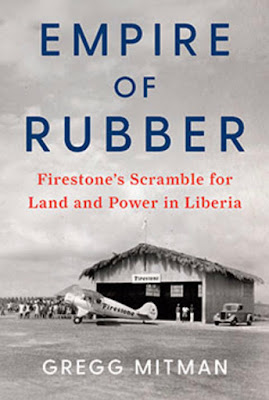 A perfect pairing for this marvelous book would be Fordlandia: Henry Ford’s Forgotten Jungle City by Greg Grandin .2009

In January of last year I read a fascinating book about a very rich American industrialist, Henry Ford, trying to find a way to supply his business with Rubber by finding a way to produce it in the third world.

In 1926 Firestone began operating a million Plus rubber factory in Liberia, a huge enterprise meant to supply The Ford Motor company with tires.

Mitman begins his book with a very interesting account of how Liberia came into existence as a country meant to be a home for freed American slaves. In esrly 19th century many White Americans wanted slaves freeed but felt even if freed in the USA they would Face discrimination.   Of course few had any Cultural roots left there,  between 1822 and The stsrt of The American Civil war in 1961 about 15,000 ex-slaves and free born persons of color were transported to Liberia. The area had an American identity, its capital Moravia was named after James Monroe.

The Liberian constitution and flag were modeled after those of the U.S., Liberia declared independence on July 26, 1847, which The USA recogized in 1862.  On January 3, 1848, Ja wealthy, free-born African American from Virginia settled in Liberia, was elected Liberia's first president after the people proclaimed independence.

In early 1920s Firestone sent out experts to Scout the World for a place to grow the huge amount of rubber the American automobile industry, especially Ford, needed. He settled on Liberia.

We learn of the shameful racism of the Firestone compsny.  They hired very few African Americans and they got only the lowest worst paid jobs.in Liberia he gave all the management jobs to American whites.  In Liberia descendents of freed men who immigrated totally ran the country even though natives far out numbered them. Mitman goes into substantial detail about the Internal politics of Liberia.

There is much to be learned from Empire of Rubber- Firestone’s Struggle for Land and Power in Liberia by Gregg Mitman - 2021.

There is bio data and info on other work