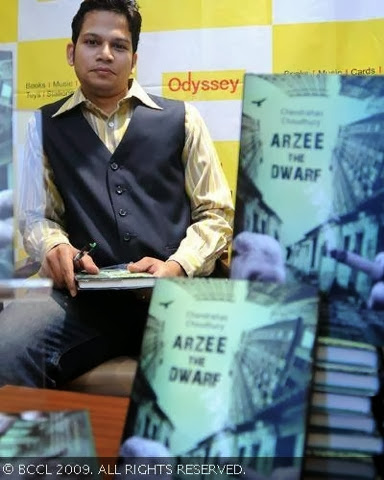 Chandrahas CHOUDHURY is based in Mumbai. His book reviews and essays appear weekly in the Indian newspaper Mint Lounge, and have been published in dailies, magazines and journals worldwide. His short stories are included in the anthologies India, First Proof 2, and India Shining. He is the editor of India: A Traveler’s Literary Companion and writes the literary weblog “The Middle Stage” (atmiddlestage.blogspot.com). His first novel, Arzee the Dwarf, was shortlisted for the 2010 Commonwealth First Book Award. He participates courtesy of the Bureau of Educational and Cultural Affairs at the US Department of State.

I have an affinity for novels set in Mumbai, or as I prefer to still call it , Bombay.  Mumbai is the home to lots of the readers of my blog.  I am an advisory director for a Mumbai based literary journal, The Lakeview International Journal of the Arts and Literature.  Novels about the "dark-side, the underbelly behind the glitter of the rich and the multinational corporations, of Indian mega-cities are very trendy.

Arzee the Dwarf centers on a man, maybe forty or so, who has worked for many years as assistant projectionist at an old seen better days Mumbai movie theater.  He is a dwarf and much of the narrative deals with how his diminutive size impacts his life.  He is unmarried and things his being a dwarf is the reason.  In an culture of mostly arranged marriages, nobody  wants dwarf grandchildren.  He lives with his elderly mother who he totally supports and his older normal height brother.  Nobody else in the family is a dwarf.  His job and his mother are pretty much his world.  He does have friends in the area, likes to get a meal at a favorite place, chat with friends (mostly about women) and is not above a brothel visit.  This is kind of a noir novel but not hard core.

When he learns the been on the job thirty years head projectionist is retiring he leaps to the joyous conclusion he will be promoted.  The plot action of the novel really gets started when he learns the theater will be closed in two months.

Arzee is thrown into despair.  He agonizes over how to tell his mother.  He rants at the injustice of it all.  He meets a nice girl.  Lots of interesting things happen and we get a good feel for the life of the people in the novel.

I read some other posts on the novel that said the ending is kind of happy close pat.  Well Ok not going to contradict this but I liked it as I did not want harm to come to Arzee.

Arzee the Dwarf is a very well written novel that kept me interested and caring throughout.  It was fun to read and the characters are well developed, especially Arzee.    I look forward to following the career of Chandrahas Choudhury.

In the interests of full disclosure, I was given a free copy of this book.