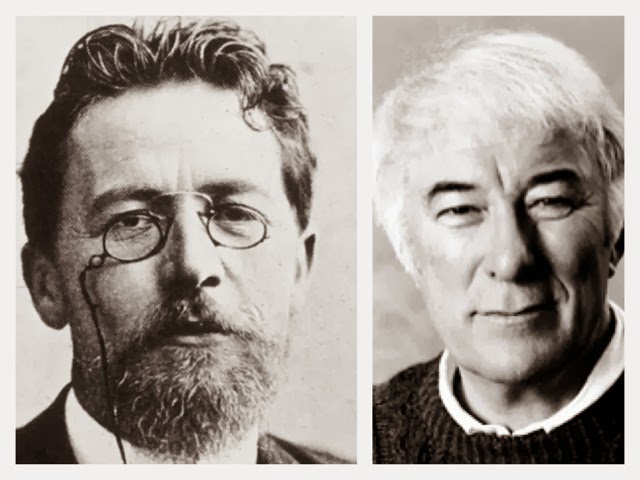 "To try for the right tone, not tract,not thesis
And walk away from the flogging,
He was taught to squeeze the slave's blood out
and waken a free man,
Shadowed a convict guide through Sakhalin" -Seamus Heaney
I have been reading Chekhov (1860 to 1904) on and off for decades.  I am sad to say it took the publicity generated by his passing to draw me to read Seamus Heaney (1939 to 2013-Nobel Prize 1995).   Chekhov, his father was a serf who bought his families freedom,  was a doctor.  In Czarist Russia this carried little prestige outside of physicians to the nobility.  Heaney illuminates one of the central mysteries of Chekhov in his poem about his time at the convict colony of Sakhalin.  In his vast writings it is near impossible to see behind it an ideological structure.  Chekhov just presented life.
"At the Villa" helps us understand one of the central puzzles of twentieth century Russian history.  Why did the serfs, the peasants support the Czar and the nobles rather than the Bolsevicks?  The argue,ent of the left was that the peasants suffered horrible oppression, basically slavery.  Their sons were sent to die in senseless wars, their labor went to pay for incredible luxury for the elite.  The answer of the serfs was "better the devil you know than one you do not".
An affluent bourgeoise couple, the man is an engineer buy a villa in the country.  The man had previously been in charge of building a bridge and he liked the area.  The couple, the wife is in fact from a serf family, want to treat the local peasants as equals, as friends.  They do decent things to help them.  In return the peasants rob them and vandalize their property and show no respect.  In time the couple are so unhappy they sell the villa.  The new owner treats the peasants as his inferiors and lords it over him.  In return he is treated with the utmost respect and suffers no robberies.  A great story illuminated by a great poet, deep responds to its own.