Signatures in Stone by Linda Lappin -2013 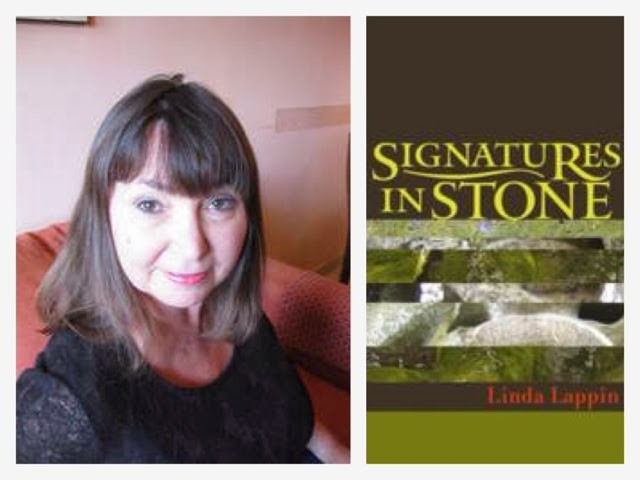 I first became acquainted with the wonderful writings of Linda Lappin when I first read her highly rated novel based on the final years of Katherine Mansfield, Katherine's Wish.  I thought she captured with amazing perspicuity the persona of Mansfield and her complex personal relationships.  I vowed to follow her career and next read her very atmospheric, some felt it was apt to describe it as Gothic, The Etruscan,  a mystery set in Italy between the world wars.  I loved it for the prose and the perfectly realized central character.
I think Signatures in Stone is Lappin's best work to date, and that is saying a lot.  Set in the 1920s the central character, Daphne comes from Paris to overcome writers block and to clear her head from too much hash.  She arrives in Bomazo, Italy with her agent Nigel, allegedly an English aristocrat, who has been promising her an advance on the book she is supposed to be working for a while.  They  have booked part of an old run down villa.  Of course it comes with some mysterious servants. Nigel brought along his friend Clive, a sexual opportunist who ends up having an affair with Daphne, considerably older than he.  Also staying at the villa is an art expert, Dr. Firestone.  Dr. Firestone is there to direct the restoration of a garden called, "The Sacred Wood".  The heart of the story begins as we see Daphne become more and more fixated on the mysterious and sinister statues.   Italy was once seen in English literture, in the tradition of works by D. H. Lawrence and E. M. Forster among others, as an exotic almost exotic  tropical place where you do thinks you might do back at home. 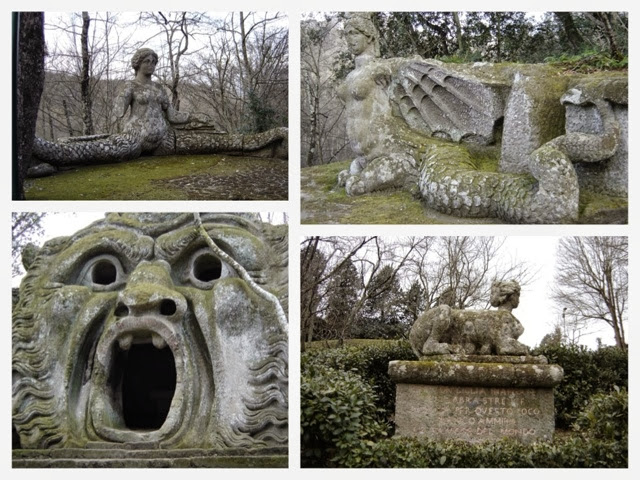 Nobody is quite what they seem to be.  Everybody is out for everybody else, body, soul, and purse.
Daphne loves hash and Signatures in Stone lets us see how creativity sometimes feels like a hashish dream.
There is a murder with plenty of suspects. I was very taken up into the investigation of the crime.
Signatures in Stone is a fascinating book, deeply evoking the mysteries in the history of the garden of stones and beyond this Tuscan history.

AUTHOR BIO: Linda Lappin, novelist, poet, essayist, and travel writer is the author of two award-winning novels. Her first, The Etruscan (Wynkin de Worde. 2004), a tantalizing suspense tale set in Italy in the 1920s, was runner up at the New York Book Festival and short listed for the 2011 Next Generation Indie Award. Her second,Katherine's Wish (Wordcraft of Oregon, 2008), based on the life of New Zealand writer, Katherine Mansfield, received the gold medal in historical fiction from the IPPY awards and was a finalist for the ForeWord Book of the Year Award in fiction. Signatures in Stone is her third novel. All three novels are also available on Kindle. Upcoming projects include a memoir, Postcards from a Tuscan Interior, sections of which won a Solas Award from Travelers Tales, and Genius Loci: A Writer’s Guide to Capturing the Soul of Place,a craft of writing book. She teaches English at the University of Rome La Sapienza and lives in a pentagonal house in a medieval village near Rome.She is currently at work on a new Daphne Dublanc mystery, Melusine, set in the Italian village of Bolsena, another site of Etruscan legends. She holds an MFA from the University of Iowa Writers Workshop and is a member of the Associated Writing Programs (AWP) and of the European Association for Creative Writing Programs (EACWP)

I hope to do a Q and A with Linda Lappin soon so please look for that.