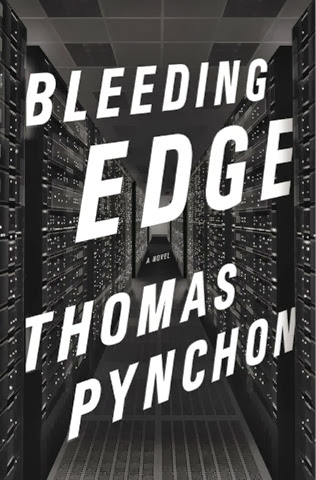 Do you know what W.A.S.T.E. stands for?  did you ever put a post horn on your mail box?  Then this is a book for you.
In my opinion, Gravity's Rainbow is the greatest novel by an American.   I began reading it for the first of many times shortly after it was published in 1973.  I have a first edition that would be worth a bit of money were it not falling apart.  With no hesitation I would place it on a list of the world's ten greatest novels,   In reading Pynchon I would say start with The Crying of Lot 49.  It is short and pretty linear in its structure.  Then try Gravity's Rainbow.  It is not an impossible book.  I am rereading it slowly now and it seems better than ever, almost a holy text.
Bleeding Edge has to be one of the most anticipated new novels of 2013.  There are already lots of reviews online.  Reviews have been mixed overall.  Interstingly, The Guardian reviewer said it a book "for Americans only", saturated with American pop culture references.  I bought this book the day it came out.  I did not fall in love with it until about the midpoint.  There are lots of plot summaries online and I won't be doing one.
The book carries on the grand themes of Pynchon.  The power is still there in his prose.  The central character, Maxine (people will be comparing her to Oedipa Mass), works as a fraud investigator.  Bleeding Edge can be read as a study of the great depth of fraud built into American and world culture. Characters says thing about the 911 attack on the World Trade Center in New York City that will inflame many people.  Transcedently brilliant things are said about the growing domination of the world by the Internet, how it is taking over every aspect of life.  To those who say it is an American centered book, which it is, one can only say, like it or hate it, we are in an America centered era and no one does a better job of telling us what this means than Thomas Pynchon.
I ended up loving this book.  Everyone into Pynchon will probably end up reading it.  I hope to reread it in the first quarter of 2014.  To new Pynchon readers, start with The Crying of Lot 49.  I do not suggest it as a first Pynchon.