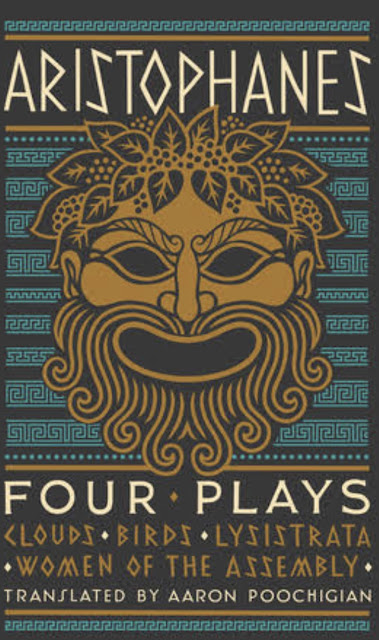 Lysistrata is the organizer of this sexual strike.  When asked what to do if your husband forces himself on you she says “just lay totally stiff, don’t grind back”.  Female actresses lift up each others tunics for inspection purposes, commenting on what they see.

The men are very upset insisting the women have no reason to complain about wars as they do not participate.  Lysistrata  explains that they lose sons and husbands in war.  All of the women involved are aristocratic though they live in a society where slaves out number the free.  A slave woman plays a minor role, and is  treated with no respect by her owner, Lysistrata.

From the play as the women take an oath to withhold sex:

In what Aaron Poochigian says is very unusual in Ancient Greek Drama, there are two choruses, one of old men, one of old women. The old women play a big part in the action, seizing the treasury Athens needs to wage war.  The two choruses converse with each other about the sex strike as well as making comments to the audience.

There are three videos on YouTube of staged performances.  The actors are college students and to me they seemed overacting and the choruses did not seem very well done.

A blog I have followed for many years, Wuthering Expectations, is doing a read through of all the surviving Greek Plays, a marvelous endeavor I wish I could have emulated.

There are three other comedies in the collection,  Birds, Women of the Assembly and Clouds.  I am hopeful I can read and post on them by the end of 2022.

ABOUT THE TRANSLATOR Aaron Poochigian earned a PhD in classics from the University of Minnesota and an MFA in poetry from Columbia University. He is the translator of, among other classical works, Sappho’s poetry (published under the title Stung with Love), Apollonius’s Jason and the Argonauts, and Euripides’s Bacchae, and has published two books of poetry—The Cosmic Purr and Manhattanite—and a novel-in-verse, Mr. Either/Or. His poems have appeared in such publications as Best American Poetry, the Paris Review, and Poetry. He lives in New York.

The Poochigian translation looks good. There is a lot of art in translating these comedies, and lots of different approaches.

Reading all of those plays is an ambitious goal. I'm feeling a bit inspired by you and Tom, but I do have this huge TBR stack....