The House of Morgan: an American Banking Dynasty and the Rise of Modern Finance by Ron Chernow - 1990 - 1232 Pages 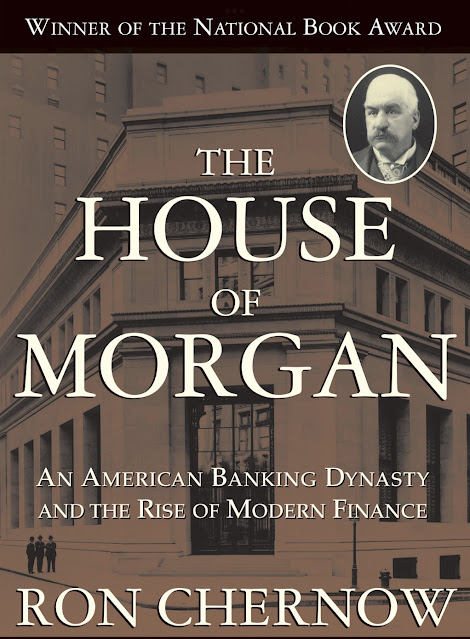 WINNER OF THE 1990 NATIONAL BOOK AWARD FOR NON-FICTION

The House  of Morgan: an American Banking Dynasty  and the Rise of Modern Finance is  fourth of the six works by Ron Chernow I have so far read.

Prior to today I have read three other works his of biographically centered histories:

Last month I read A People’s History of The United States by Howard Zinn.  Zinn’s central thesis is that all the events in American history from The Revolution up to The Vietnam War were only for the purpose of enriching  a small elite..  He suggests patriotism was used to delude ordinary Americans to die for the rich.  Julius Pierpont Morgan and the companies he was involved with are among those most vilified as causing great harm while pretending to be acting in the public interest.

Chernow presents a very detailed account of the very important role J.P. Morgan had in the Development of the modern American financial system.  The book is of tremendous value to all interested in 20th century American history.  My reaction in regards to the claims of Zinn is that Morgan did in many cases try to do what he thought was best for the country but he expected to profit from his actions

Chernow goes into a lot of details about the interlocking connections of banks to American corporations.  We learn a lot about the personal lives of those involved.

Ronald Chernow is an American writer, journalist and biographer. He has written bestselling historical non-fiction biographies. He won the 2011 Pulitzer Prize for Biography and the 2011 American History Book Prize for his 2010 book Washington: A Life. Wikipedia