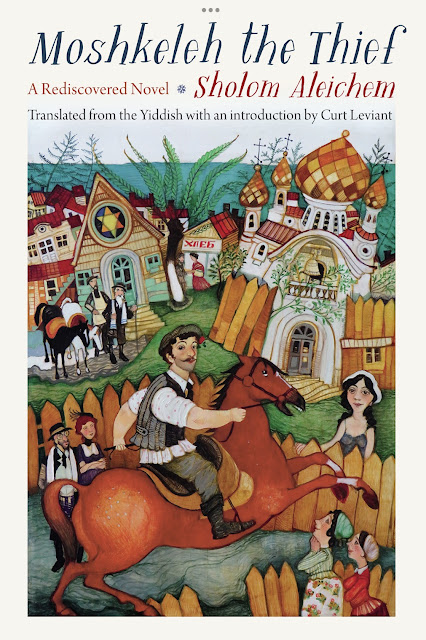 “This almost-forgotten novel by one of the greatest Jewish writers of all time is revelatory, vividly depicting an all-too-rarely-seen side of Yiddish literature and Jewish life; its rendering here, by one of Jewish literature’s greatest translators, provides a crackling energy befitting its material. Don’t start it too late in the evening; you won’t be able to put it down.” —Jeremy Dauber, Columbia University professor and author of The Worlds of Sholem Aleichem

a very informative conversation with Curt Leviant on Moshkeleh The Thief

This was The first work of Yiddish literature focused on criminals.

1859 Born in The Ukraine, then part of the Russian Empire

To most people, certainly me a few years ago, Yiddish writers were divided into two categories, Sholom Aleichem and a bunch of authors I have never heard about whom I would never have read were it not for Yale University Press giving me a full set of The Yale Yiddish Library.  These nine volumes, introduced by top authorities in Yiddish Studies, include some of the great classics.

Among the works were two totally marvelous novels  by Sholom Aleichem.  All of the works were pre-Holocaust, written in Eastern Europe and Russia.  All were by men.  As Yiddish speakers left Europe, mostly to NYC then Toronto and Montréal women writers like Blume Lempel and Chava Rosenfarb began publishing in Yiddish.  I have talked a bit about the history of Yiddish Literature (running from around 1875 to maybe 2004 with the passing of the last of the emigrated writers) in prior posts.  My perception is most seriously into Yiddish Literature, a huge treasure trove of Short Stories, are “heritage readers” seeking ties with the world of their ancestors in Eastern Europe.  Behind it is also a powerful message to those who would destroy Jewish Culture, you lose, we win.  I read in this area because it is an incredibly wonderful literature.  The stories range from heart breaking to funnier than a Mel Brooks movie.  Yiddish scholarship has very strong support and thanks to the internet, and maybe especially The Yiddish Book Center, interest is  growing.  YouTube has lots of good videos and readings of stories.

Sholom Aleichem is by far now most known Yiddish writer.  He is most famous from the movie Fiddler on the Roof based on his Tevye Cycle, centering on a Russian dairyman and his relationship with his daughters.

Moshkeleh the Thief, set in a small mixed community, centers on a famous horse thief.  Moshkeleh came from a respectable Jewish family.  He was sent to traditional schools to study the Torah but instead he met accomplished thieves.. We learn about the various kind of thieves. There were pick pockets, House burglers, strong arm robbers, kidnappers, informers for hire, experts at bribing officials and horse thieves.  Thieves have their own argot.

The work was first published as a serial in a popular journal, Moshkeleh Ganev, Warsaw. so there are lots of exciting events to draw readers to buy the next issue. Moshkeleh wanted to get married.  Marriages were mostly arranged and no decent Family wanted him for a son in law.  He became

enamored with a teenage girl, following her around until he realized it was futile.

In an interesting subplot, a Young Jewish woman runs away from her home to marry a Gentile.  Her parents hire Moshkeleh to kidnap her.

The introduction by Curt Leviant

details the publication history of the work.

Curt Leviant is the prize-winning author or translator of more than twenty-five books. Besides Sholom Aleichem, other Yiddish writers he has translated include Chaim Grade, Isaac Bashevis Singer, and Avraham Reisen.

Moshkeleh the Thief is a very valuable edition to translated Yiddish.