"Grave Yard of Romance" a short story by David Appleby

Today I am very happy to publish another wonderful short story by David Appleby.   Today's story captures in just a few pages a story that is almost an elegy to a marriage.   It is a very moving story about the endurance of love and of passion, even when the people involved have transformed radically.

You can read another of his wonderful stories here.

"The Grave Yard of Romance"
a short story by 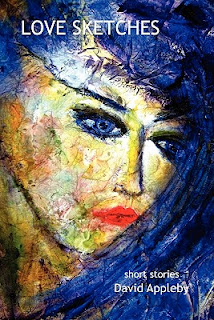 Author Bio:
David Appleby is the author of "Moon Alley," a novel written in the form of connected stories and cited byamazon.com's 'top 10 reviewer, Grady Harp,' (Los Angeles) as "a solidly unique voice...and a highly recommended first novel," and was praised by 'Book View Ireland' for its "pleasing symmetry of structure and convincingly drawn picture of a once-thriving area."

His new book is titled, "Love Sketches," a collection of short stories which explores the "sensuality of romance and the varieties and vagaries of love." One of the stories in this collection has been anthologized in "Short Breaks: The Very Best of Shortbread Short Stories," published by Discovery Press, Scotland. It has also been recorded as an audio narrated by the distinguished British actor, Paul Jerricho.
The author, a recipient of a PEW Fellowship, is a graduate of Temple University


"The Grave Yard of Romance"
She watched her husband slowly form a letter in the square and then another and another, and then he paused as if thinking, but she knew he was not thinking; she knew he was frozen, practically catatonic, the pencil locked between his gnarled, arthritic fingers that ceased to function at the fourth empty square of the Sports Today crossword puzzle. She thought to say something to him; she thought she should make an attempt to thaw him from his frozenness, but she thought better of it. It was too late for that she knew, for he had simply shut down, mentally and physically. It would pass, she told herself, as it always did though she realized his inertness had begun to last for longer periods of time than when she first noticed his vacant gaze, his longer silences, his immobility.
She waved the waiter to the table. “May I have another glass of Pinot Noir, please?” She reached up and placed her hand on the young man’s arm. “And will you bring another cup of coffee for my husband?” She smiled at him as she said this, and allowed her fingers the smallest lateral movement along his arm. Several minutes later her husband took a deep breath and looked up as if waking from a brief nap. She watched as he returned to his crossword without a word, and felt that he was uninterested in his surroundings and unaware of his brief escape to the placid terrain of old age; she believed he was no doubt unconcerned that she was now drinking her third glass of wine. She smiled as she watched the young man disappear into the restaurant, and then turned to her husband with what was left of her smile. “Your coffee will be here momentarily,” she told him. She saw him fill in the fourth square to complete the word across: T-A-M-P.
Yes, she thought to her self, tamp, as in tamp down soil and sand and . . . emotions. That’s what Dr. Ellerby had said. ‘Marie, tamp down your emotions.’

But why? Why tamp down my emotions? Why, because I’m ‘old?’ Is seventy old? And isn’t seventy the new sixty? Didn’t I recently read that . . . somewhere? No, it was on talk-radio, she quickly recalled, but what is his name? The host’s name, what is it now? He has such a pleasing, romantic voice. A radio voice, the voice of an actor. But what is his name? Oh, how I hate this, she sighed, forgetting names. But her concentration waned at once when she saw the waiter move toward her with his small round tray balanced on the tips of his fingers. She kept her eyes on him as he approached the table. Is he smiling at me?
He is smiling at me, she told herself, and then she smiled broadly in return as he nodded and placed the glass of wine before her and the coffee cup and saucer and gleaming silver pot to her husband’s side. Such a pleasant smile and such wonderfully white teeth too, she marveled, sliding her glance to his tanned face. And he, barely in his thirties, she surmised, while not once taking her eyes from his.
A young man’s flat stomach; clear eyes; smooth skin; a sun—kissed tan. Well, she mused, he works outdoors, after all. Day after day he works in this lovely sidewalk café in a city where the sun always shines. How pleasantly he smiles at me.
Does he see that I am without wrinkles? That there are no lines above my lips? No crow’s feet at my eyes? And does he notice that my skin doesn’t sag? Has he admired my slender arms, my clear hazel eyes, and has he noticed my chic French-cut hairstyle? How could he not? I saw him smile at me the minute we entered the café. His eyes haven’t left mine since. No, they haven’t, have they? And from the bar where he collected our wine and coffee, why I saw that he turned to me and smiled the moment our eyes met again.
She poured her husband’s coffee, and added the smallest amount of cream. She took a small packet of saccharine from her pocketbook and emptied its contents into the cup. Her husband had affected a faint grin, a grin still frozen in place, and she could see that his vacant eyes looked past her into the void. What was it, our little Caroline said last month? ‘Grandfather’s eyes are broken again, Grandma.’ Yes, Caroline, grandfather’s eyes are broken, again, she thought, as she looked into her husband’s moist, empty eyes.
The waiter brought her the check, and she reached for it before he had a chance to place it on the table. Their hands touched, and the waiter smiled and said, ‘Madam.’ She held the check and touched his hand and said ‘thank you,’ in return. I saw the way he looked me, she told herself as he walked to another table to hand another patron a menu. Yes, she thought, I know that look, know it well. She reflected for a moment more, and then sighed.
She stirred her husband’s coffee and moved the cup and saucer next to his newspaper. She knew the coffee would grow cold, and that he would return from the void to complain about the quality of the café, the lack of prompt
service, and the vagaries of vacationing in a foreign country. He would tell her of his need to return to the hotel for his afternoon nap. ‘It was one museum too many,’ he’d say before settling himself in the taxi and dozing off on the way back to the hotel. It was what he had said yesterday, though they hadn’t visited a museum all week.
Back at the hotel her husband stretched out on the bed. She removed his shoes and unbuttoned the first two buttons of his shirt, and then carefully drapped the coverlet over him. He breathed heavily and repeated what he had said in the taxi about the museum. She answered, “Yes, dear, it’s all very tiring, I know.”
A moment later he fell asleep.
She sat in the chair and opened her book and read two pages before closing it and turning to the window. She looked out on the sun dappled street and thought of the young waiter. She thought of his smooth skin, his sun-kissed summer tan, his clean cut face, his thick black hair. She saw romance in his eyes, and recalled how his eyes had lingered on hers when he smiled at her.
“Timothy Carlson,” she whispered. “Timothy Carlson is the host of that radio program,” she said confidently, remembering the name at last.
And then she reopened her book and read for the remainder of the afternoon before finally falling asleep in her chair.

Love Sketches on AmazonAppleby's blog is HERE and is very interesting.  I will be posting in the next few weeks a number of additional stories by the author and am greatly honored to be allowed to share these wonderful stories with my readers.   I will also do one of my "normal" posts on some of his longer stories.Again my thanks to David,Mel u