The Book of Paul by Richard Long 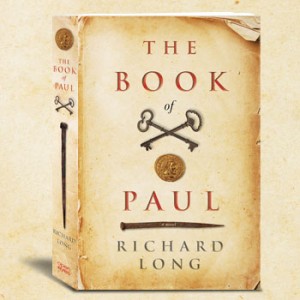 For the last thirty cycles I have been assigned to study an early 21st century text , The Book of Paul.   It appears to have been transcribed  by an American ( from once well known country whose history has yet to be uncovered since 1 POL, perhaps called United Islands of America-some say it was once a single land mask but this is contrary to approved historical doctrines) named Richard Long.   It is the only surviving text up until books were once again allowed in 313 POL.  My life work and my passion is to try to reconstruct their  society from this text.  Obviously it was a considered a holy text otherwise it would have been destroyed in 112 P O L, in the Great Purging.   It was saved through electronic tablets.   I feel the term "book" must refer to a revelation from figures in the shadows, the watchers and I conclude that The Book of Paul was the source of the basic beliefs of the era and also an attempt to preserve the folkways of a dying culture for whatever future Long knew was coming.    Long himself is not the prophet, not the Godhead, he is the chronicler of Paul and those who first followed him.

We know from the events prior to the peace brought to our planet by the blessed colonization of our world by the Overlords of Valrenedet that people once lived in what were called families.   They depended on the exchange of intrinsically valueless pieces of paper to survive.    In times of decay we know that there are many competing to be worshiped for their wisdom.   Long talks about the various occult doctrines (for an explanation of this please see director Wurtenberg's landmark book Crowley:  The Godhead and my article on the Tarot of Waite in the most recent annual studies of the Institute) which arise when people do not have the Overlords to direct them.  They derive pleasure, almost like what was once known as sexual, from pain.  In one chapter, "Stigmata" Paul shows great love for his disciple Martin by nailing his hand to a wooden desk. The pain felt by Martin makes me almost long for the time before our pain sensors were removed.   I hope we will be able to explain the culture import of the word "stigmata" one day as it is in no existing vocabulary tablets.   Paul appears to have been in competition with one other 21st century cult figure, Jesus, but I can find no reference to him outside of the work of Long so I am assuming he lost out to Paul.

Based on The Book of Paul, women appeared to take delight in being abused.  The most prized of the species stood ready at anytime to open their various orifices to any passer by for usage as needed.   An unsatisfactory byproduct of these actions were offspring produced through a clearly barbaric method of reproduction.   Hunting small animals, called rats (the last small animals disappeared many 100s of cycles ago so we do not know why these rats were so hated) was an important religious ritual in which young men were trained by minor cult leaders called "daddys".

My studies  show, I think, how we can reconstruct a vast society, ruled by violence, dominated by a lust for pieces of paper that you could obtain items (and other people) with from The Book of Paul.  Paul, I do know he was considered by many both a wonderful and  terrible figure, obtained great wealth through something called the "Intreneit". All we know of this is that upon the arrival of our benevolent overlords it was outlawed on the pain of death.  I know I will pass before I have unraveled this text but it is my glory to have been exposed to it and I long above all for one who could nail my hand to the desk and then allow me to witness his coupling with female acolytes who would then cook us delicious meals from what I can only imagine rats were.   May the blessings of  Paul   be upon you.

End of the fragment of the working notes of Blaine Nhugleter

The Book of Paul was a compulsive read for me.  I kept wondering what terrible amazing thing was going to happen next.   What horrible things will Paul do and what sufferings will fall on his follower Martin.  There are just a lot of amazing scenes in this book.  In one especially amazing segment we take a visit to a store where books made from human skin are for sale. The scene where a man's hand is nailed to a table, with skill used to avoid any arteries or bones is as horrific and marvelously done set piece of sadism as I have read in a good while.   The book goes deeply into the occult.  I think it is safe to say many of the ideas came from works like The Book of Toth by Aleisiter Crowley which  drew on early 20th century English occult circles understanding of the Kabbalah and Egyptian doctrines.

The novel more or less begins in the East Village area of New York City, a very rough part of town.  Martin and a tattoo artist named Rose have a romantic encounter and soon become pawns in a giant conspiracy which the sinister Paul is behind.

The Book of Paul will for sure appeal to lovers of paranormal occult themed books.  It will satisfy the lusts for pain of the most masochistic among us while accepting our own darker drives.  The action is nonstop, there is a lot of interesting data about things like quantum physics, Irish mythology,  technology and alternative religions outside the main stream.  The ultimate theme is a battle to control the universe with Paul becoming more and more powerful.

Book lovers will love the obsession with ancient texts and secret narratives.   The chapters are short and you never really know what to expect as you start one.   The writing is compelling.

Underlying The Book of Paul is a rewriting of the underlying myths of western culture, a Gnostic and thoroughly Manichean view of life powers this story and the part of me that decades ago was very into similar occult doctrines finds them to still have power.   There is also a lot of sex in this book, child abuse and lots of other nasty things to keep you reading.  This is not a book for the squeamish, it is not a Harlequin Romance.  Nothing is what it seems to be at first, our perceptions of events constantly change.

There is a great description of the book on Long's webpage.

One of the things I like most about The Book of Paul is just how much of a reading life book it is, everything in this book that matters comes from the power of reading.   There is something magic in the act of reading and Long knows that.

An Ebook is available for only $0.99 (120 pesos).   There is a lot in this  500 plus page book and I think anyone, with the qualification that this a very adult in part x- rated book, will find this an exciting read.  Those with a taste for the Occult (True Blood fans like myself will totally relate), who like lots of action and suspense and don't mind lead characters they can hate, will love this book.  I know I did.

It feels like Long was driven to write this book, almost as if it were really a holy text placed in his consciousness by the Overlords.   I see dark figures reading this book from way back in my past and maybe from the future also.

Hats off to you Mel, for such a spectacular intro and of course for your review. The commentary well suits the archival material you discuss. Any and all questions from you and your readers are welcome:)

Fantastic review, Mel! I'm so glad you enjoyed the layered madness that is The Book of Paul. One of my favorite parts was when Paul and Martin were discussing the master-apprentice relationship throughout history. This is definitely a unique and compelling read! Thanks for being part of this tour, and please take a moment to cross-post your review to Amazon and GoodReads.

Once again, I want to thank you for a wonderful review and for hosting me on this event. I would be tremendously grateful if you’d be willing to post your review to Amazon, since Amazon rules the world! lol Also, I’d love to talk to you about doing a guest post on your site, or cross promoting in other ways. I love your site and look forward to hearing from you. richard@richardlongauthor.com