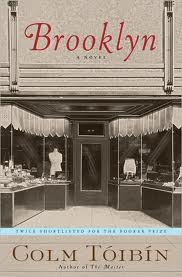 Brooklyn is the second novel by Colm Toibin I have read.  The first was The Master, based on the English years of Henry James.  I have also posted on two of his short stories.( Two participants in Irish Short Story Week Year Two-March 11 to July 1 have done excellent posts on Toibin and I will link to them at the end of this post).  Most of my reading and posting since March 11 has been devoted to the event but I am also reading novels and will post on them upon completion.  I will be keeping my posts on these works short for the duration of the event.

Brooklyn is set in the 1950s.  It is about a young Irish woman, Eilis, who moves from rural Ireland to Brooklyn in order make a better life for her self.  I was so interested in Eilis  that once I started Brooklyn I read it almost compulsively because I wanted to find out what would happened to her.  Normally I read a number of works at the same time, flipping from one to another (Ipads are great for people who read multiple works at a time) but once I started Brooklyn I stuck with it.  I kept hoping nothing really bad was going to happen to Eilis.

Toibin does a great job of showing how Eilis both seeks out a closed in morally judgmental venue just like she had in rural Ireland and is slowly opened up to new ways in America.   The trip to America in third class on a steam ship is brilliantly depicted.  There are lots of minor characters in the novel.  One of the really great ones is Georgia, an Irish lady who shares a cabin with Eilis.  Georgia has been coming home from American once a year for twenty years.  At first Eilis is pretty intimidated by her and she does seem like bit of a bully but by the end of the passage I really liked how she helped Eilis.  I felt bad when we parted company forever with her when the ship lands.

Eilis gets a job working in a big store and lives in a boarding house owned by an Irish woman and all of the other tenants are Irish women also.  The department store and its management are very interesting.

Eilis meets a man, a kind decent one but he is not Irish.  She goes to night school.   Brooklyn is very much about the immigrant experience.   It is about longing for home and the consequences of emigration on those who are left behind.

Brooklyn is a very well done character driven novel.  There is enough plot action to make it interesting.  It is easy to follow and a pretty fast read.

I liked this book a lot and will be reading more Toibin soon .

I am pleased to hear you enjoyed this novel. I have not read it yet, but thoroughly enjoyed The Master. Thanks for review.

I loved Brooklyn - it was the first book by Toibin I'd read and it made me want to read more. I like your review.

Excellent, concise review! I've wanted to read Brooklyn since I first heard of it. I'm so glad you recommend it.

I loved Brooklyn! Listening to it was my first experience with Toibin - the audio version was very well done. I've read several of his stories since then, but still plan to read The Master and The Blackwater Lightship.

I really enjoyed this novel and would definitely read it again. Thanks for reminding me of it.

This book has been on my wishlist and your review makes me want to read it sooner rather than later. Sounds wonderful!

Kept seeing this title pops up on my radar. Another endorsement from you to read this book. Thanks for the review.

I thought I had already read this book; however, it is just another book about an individual coming to the United States. It was pretty much day after day the same thing. I wouldn't go and buy this book again.