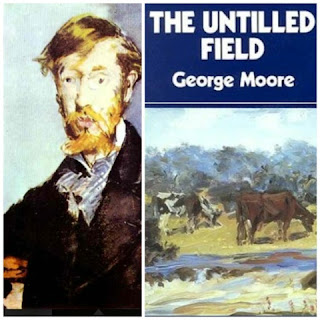 A Few Days with George Moore

"Take George Moore, for example. George Moore is the best living novelist — and the worst; writes the most beautiful prose of his time — and the feeblest"-Virginia Woolf

"It is no country for an educated man.  It won't be fit to live in for another hundred years.  It is an unwashed country, that is what it is"-from "In the Clay"

I have decided to devote a few posts to the stories in The Untilled Field"  by George Moore.    Frank O'Connor said it was one of the greatest of all collections of short stories.   I first posted on Moore's story "Albert Nabbs", about a woman living out her life as a man. (This story is not part of  The Untilled Field).   By pure luck I posted on it just as a movie based on it was up for an Academy Award for best picture.   I did not know there was a movie based on the story (the movie never showed in Manila) until I checked my blog stats and saw ten times the normal number of hits on a new post.  A quick Google search found the movie.  I wish George Moore could have gotten a pay day from this.  For my first post for Irish Short Story Week Year Two I selected Moore's "Homesickness" mostly on the powerful endorsement of Frank O'Connor who describes it as a perfect work of art.  I loved the story.   I have decided to post on the remaining stories in the collection one by one, probably two to a posting.   Interest in Moore as a writer seems high.  A five volume collection of his short stories has recently been published, going for a mere $495.00!

In order to increase my understanding of Irish literary culture I have begun reading what is clearly a brilliant book, Inventing Ireland:  The Literature of the Modern Nation by Declan Kiberd  In the opening chapters he talks about how many of the greatest of Irish writers did not really develop a strong sense of being Irish until they left Ireland.   He talks about how the Irish almost needed to define their own identity by a contrasting duality with the English.   George Moore is a prime exemplar of this theme as illustrated by the opening story in The Untilled Field.

"In the Clay" is almost an attack on the Ireland, depicted as a place where art could not flourish and priests control a backwards citizenry.

"In The Clay" is about a sculptor working in Ireland.   I think Moore used as is artist a sculptor as the "over head" cost of producing a work of art is very high and takes a long time.   The sculptor has spent a lot of time practicing his craft in Italy where he was a helper to a master and did some commission work and lived on a scholarship grant he received.  When the money ran out he came back to Ireland and with the prestige of Italian training attached to his name, he was able to set up shop and get steady work.   He received from the local senior priest a very wonderful commission to do a statue of The Virgin and her child.   The first step for this is to find a model for the Virgin, who must be willing to pose nude.   He finds a sixteen year old girl, a beautiful very respectable girl who agrees to pose for him.   Artist or not there is clearly a sexual element in the work and in the man staring intently at the naked body of the girl and objectifying her body parts.   The artist does not see it that way, of course.   One day the priest comes into see how the work is going.   When he sees the nearly finished statue he has a shock of recognition when he sees the face of the girl on the statue.   The priest does not say anything but when the artist comes to his studio the next day the statue has been smashed.   The girl arrives to model shortly and he tells her the priest has sent in thugs to destroy the statue because he cannot understand the beauty of his art. She knows this not what really happened.    I will leave the rest of the story untold as the ending is really powerful and bears out the notion of the Irish identity being created by writers in exile and of the internalization by the Irish of the brutal characterization given them by the English.   Kiberd's book is helping me see Irish literature as very post  colonial.

"A Letter to Rome" is just a flat out wonderful story on lots of levels.  It is hilarious, it is wicked (it made me think of Swift's "A Modest Proposal" but his is probably only me), is is another attack on the priesthood (Moore repudiated the Catholic Church, the religion on his raising) it  is a satire on attitudes toward Ireland at the time and the ending is just a marvel.    The plot is pretty simple.   The population of Ireland is way down from the middle of the 19th century, by about fifty percent due to the famine and the exodus it caused.   The people are pretty much in poverty over much of rural Ireland.   According to the priest who drafts a letter to Rome there are about 4000 priests in Ireland.   Outside of a few landlords and rich people in Dublin, they have the best houses, the best food, and the highest income. So the priest has an idea, why not let priests marry, within the first two years he says there would be about 4000 children and over five years close to 20,000.   All well fed and well housed.   He feels he needs to write the letter in Latin to show the proper respect but his Latin is very rusty so he approaches  another priest who is a Latin scholar and he asks him to redraft the letter.    His friend thinks the idea is a bad one and they get into a conversation about the merits of the plan.   I loved how Moore kept us wondering of the letter ever got mailed or not.

Both of these stories are wonderful.   It is clear Moore is not a big fan of the role of the Catholic Priest in Irish society.   I have ten more stories to read and I am really looking forward to them.

You can download The Untilled Field for free at several different places.