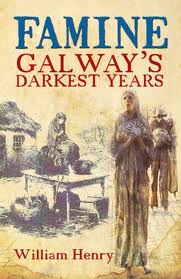 Sometimes in order to understand the literary culture of a country and its writers you have to know what the dominant events in the collective historical identity are.  In American writers like the great Irish-American short story writer Flannery O'Connor one simply has to have at least a basic understanding of the American Civil War and race relations in the southern states of America.  In order to understand the work of one of my core authors, the Nobel Prize winning Kenzaburo Oe, you ,must understand the terrible scar left in the Japanese psyche by their defeat in World War II, the atomic bombs and perhaps most of all the admission of the Emperor that he was just a man.  Likewise you cannot begin to understand Irish literary culture and the Irish Short Story if you do not look the terrible consequences of the famines in Ireland from 1845 to 1849.

The peasants of Ireland (not a word I like but "common people" does not work for me either) depended on the potato for their food. In good years a small crop of land could support a family.  Then in 1845  the crop failed.  However, and in this however, is much of  the troubles of Ireland, the island produced enough food to support about four times its population.   It was rich in livestock, eggs, wheat and corn.  Sadly this was in control of a very small segment of the population and they shipped it all overseas.  The famines did not have to happen.  The actions of the English and the landlords were incredibly cruel and uncaring and lead to about twenty five percent of the countries population either dying or emigrating.  I will not elaborate on the horrible effects of the famine very much as William Henry has told the sad and bitter story perfectly.

When you read older Irish short stories you will see lots of references to people of substandard mental capacity, people given to horrible acts of cruelty, a heavy believe in the capricious influence of fairies and   lots of ghosts, stolen children and a great sadness and preoccupation with death.   This comes from the Irish famine years.   We learn there was no music in Ireland in these years but the crying of the banshee.

I read long ago The Great Hunger: Ireland: 1845 to 1849 by Cecil Woodham Smith so I still recalled the basic facts of the famine.  I think the best kind of history takes us down to particular cases and places and William Henry's book lets us see and almost feel exactly what it must have been like to live in Galway, Ireland in the Famine Years.  Here are some of the things I learned  from Famine:  Galway's Darkest Years.

Henry tells us of the horror felt by the city people of Galway when 1000s of starving people began to come into the country side.  The workhouses, places to go to die for too many, did not have room so many committed petty crimes to get locked in jail so they would be fed.  He tells us of food vendors who triple prices and of the violence of the desperate in trying to steal food and the reprisals they face.  He explains the social consequences of this and how the landlord laws caused much of the misery.  He tells of conditions on the coffin ships that took people to America and the terrible and hate filled receptions the Irish immigrants received in  America.

I was fascinated to learn of the 1000s of Irish soldiers fighting in the Mexican American War (1846 to 1848) who deserted the American Army and joined the Mexican forces.  I will be reading more about this soon.

Here is the official biography of William Henry from Mercier Press:

William Henry is a historian, archaeologist and author from Galway City. His other books include The Shimmering Waste, the Life and Times Robert O'Hara Burke ad Fields of Slaughter, The Battle of Knockdoe 1504, Galway & the Great War, Coffin Shipand Forgotten Heroes.

The Kindle edition of this book is available from Amazon for a very fair prize.  This is a very well written and documented history that I recommend without reservations.

Knowing how much research has gone into this, you're probably already aware of this site, but if not check this out as I believe you'll find it of note.

Parrish Lantern-thanks very much for the link which I was unaware off.