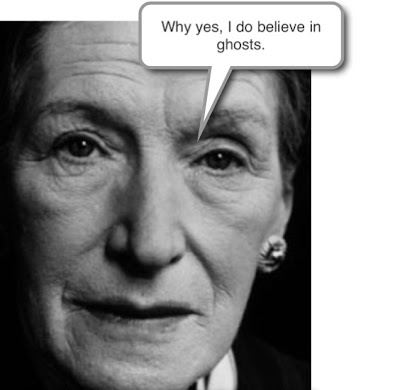 My Prior Posts on Elizabeth Bowen


For sometime now I have had a serious literary crush on Elizabeth Bowen (1899 to 1973-Dublin).   Bowen believed in ghosts and all manner of occult matter.     Her stories set in England during World War Two are world class treasures.   Bowen was not just a passive observer of the war.   She was an air raid warden and walked her assignment while the bombs fell, making sure people were in shelters and had their lights out.   During the period she wrote her stories it was by no means clear who would win the war.  Bowen said afterwards that she never felt more alive than in the times of the blitz.


Today I want to post on three of her ghost stories.   All of the stories are in Elizabeth Bowen: Collected Stories, a wonderful book.

"The Cat Jumps" is set in a country house where a murder took place two years ago.  Most of the people in an Elizabeth Bowen short story are sort of upper class, leisured people living in country houses, the sort Saki had so much fun with.   After the murder the owners listed it for sale and it took two years to find somebody who was not afraid to move into the house for  fear it would be haunted.   The new owners are oh so educated and rational and do not give truck to any occult ideas.   Of course we know they will be subject to some serious terror before they story is over and we are not disappointed.   The story is, among other things, a satire of British intelligentsia of the period.

"The Happy Autumn Fields" is one of Bowen's WWII Stories written during one of the darkest periods of the war for England.  (A Work in Progress has already done a marvelous post on this story so I will just be very brief).   London was under heavy bombardment during the this period.  If your house was destroyed, there was no compensation programs.  Many people stayed in partially destroyed house out of a determination not to let the Germans drive them out.  The house in this story is near collapse from close bomb hits.   It is feared the next raid will cause the house to collapse so the owners have to move out.   Only there is another family living there, one who knows nothing of bombs or Germans, a family whose biggest issue is what to have the cook fix for dinner.  The woman in the story begins to live in the world of these people, old long ago occupants of the house.  Maybe it is all fantasy wish projections or maybe they are real.  This is considered one of the very best of Bowen's Stories.

"Green Holly"  is a very interesting story as we see things from the point of view of the ghost of  woman who died in the prime of life.  As the story opens we meet the typical upper class English couple found in many of Bowen's Stories.   Right at the midpoint of the story Bowen somehow steps it up from a good story to a great one when we enter the mind of the ghost.  It seems she has a problem.  She has fallen in love with the man in the story, married of course.    Seeing her trying to seduce the man is simply brilliant and there are some very deep themes about the paranormal and sexuality at work here,


Bowen has other ghost stories but these will get you started.

semi-fictional has done a great post on "Mysterious Kor",  a story about a young woman who projects another, more ancient city on London, during the darkest days of the blitz.


Beauty is a Sleeping Cat has done a very insightful post on "Summer Night", one of Bowen's Irish setting short stories.

Oh these sound so very good! I have to get some her stories :-) I love ghost stories, I can't believe I haven't read any by her yet.

I'll email you later today, see if you're ready to read Butterfly Cabinet :-)

I've been eyeing the shelves for years, looking for the complete collection: lucky you!

Buried in Print-I was so shocked to see the Vintage Collection, near 800 pages, in a book store here in Manila

very good informantion i will definately visit these places i hope i find out something i hv many haunted places information too for that u can visit my blog at http://ghostexps.blogspot.in/