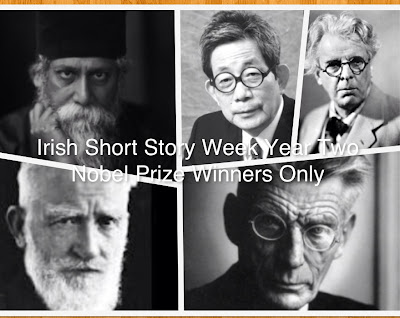 
Please consider joining us for Irish Short Story Week, March 11 to July 1 (yes long week and I feel an Irish Short Story Year might happen in 2013).   All you have to do to join us is to post on one or more Irish short stories or a non-fiction book that relates to Irish literary culture and let me know about it. I also welcome guest posts.   Everything you need to participate is in the resources page including links to 1000s of stories.  As of today I am opening up the event to Latin American writers of Irish descent.   This will be harder for those of us who do not read Spanish to explore (there are stories in English) but it is important to me to show the vast influence of the Irish Short Story Writers.  I am also as of now opening the events to Irish New Zealand writers.  I plan to add resources on these areas soon but I do need help on the Latin America Irish writers.   There are plans for Argentine Irish Day in the works now.


This week I will be posting on short stories by three Irish Nobel Prize Winners, George Bernard Shaw, William Butler Yeats and Samuel Beckett.  I am also posting in Nobel Prize winners from Indian and Japan, both with strong Irish connections.  Rabindranath Tagore gave a series of lectures that inspired Yeats.  He so impressed Mrs Yeats that Tagore was to play a large part in her automatic writings.  (Details on Tagore-India 1861 to 1941 will be in my forthcoming post).  Kenzaburo Oe (Japan, 1935) made eight references to William Butler Yeats during his 1994 Nobel Lecture.  I will talk more about the interaction of Oe with Yeats in my post on one of his short novellas.

Decades ago I developed an interest in the work of George Bernard Shaw and I read a number of his plays. In September last year I posted on his play Androcles and the Lion.

George Bernard Shaw (1856 to 1950-Dublin) is most known now as the author of the play,Pygmalion, on which the movie My Fair Lady was based.

He won the Nobel Prize in 1925 and an Oscar in 1938, the only person to have done both.   He was a tremendously productive writer with more than 60 dramas and countless articles and essays.   He was also very active in social causes.

Shaw did not write a lot of short stories and judging by "The Miraculous Revenge" it is for sure our loss.

As the story opens, it is told in the first person by a man seeming to be mid thirties or so,  who has just come back to Dublin and is off to visit his uncle, the Cardinal Archbishop.   The opening paragraph really drew me into the story, the characters and I for sure wanted to know more.   The Cardinal is a member of the Anglican church, as his nephew and they have  a patronizing attitude toward the Irish.

There are several references to the people of Ireland in this story.   I found them very interesting

He, father to a great flock of poor and ignorant Irish; an austere and saintly man, to whom livers of hopeless lives daily appealed for help heavenward.
I think Irish ladies grudge a man a moment's peace.""I wonder you have ever prevailed on yourself to associate with Irish ladies, since they are so far beneath you."
"I don't know what London manners are, Mr. Legge; but in Ireland gentlemen are expected to mind their own business.
If that be so there is no such thing as a true man in Ireland.


The main plot of the story is about a paranormal event in a graveyard that the Cardinal assigned his nephew to investigate.  It is very well done and quite exciting.

You can read this story or download it (along with lots of his other works) here.

I will next post on a short story by Samuel Beckett for Nobel Prize Winners Only Please Week.