"Death In Jerusalem" by William Trevor 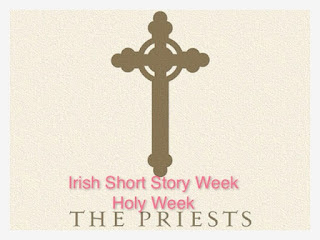 Please consider joining us for Irish Short Story Week Year Two (yes it is a long week!).   There are lots of ideas and links to stories in the resources page.   All you are asked to do is to post on Irish Short Story (or a work related to this area such as a biography of one of the writers or a historical work with some good background information) and let me know about it.   You are welcome to guest post on my blog if you like.   If you have any questions, concerns, complaints, just let me know.

As I began to post consider posting on Irish short stories centering on priests, I previously posted on Daniel Crockery's very well done story, "The Priest" I did a Google news search on "Priests in Ireland".  A picture of a priesthood in moral crisis quickly emerged with the many stories of  sexual abuse of children by priests and cover ups by church officials.  Of  course this is only the small minority of priests but it seems to have made it harder for the priests in Ireland to be moral leaders.

I think if you surveyed readers of the genre and asked them who the best living short story writer was you would get close to a split vote between Alice Munro and William Trevor.   Both are now in their eighties and both are very prolific writers.   Trevor's collected short stories comes to over 1200 pages.   His stories are normally shorter than Munro's.   Munro's are set in Canada, Trevor's in Ireland.   Both are very much cold weather writers.

"Death in Jerusalem" centers on a priest and his brother, both well into middle age and their mother.  One of the themes found in as lot of the short stories I and others have posted on this year is the clash of moral obligations and the anxiety the inability to be a fully moral person causes.   I will just briefly state the outlines of the plot here in order to illustrate what I mean.   For sure this story fits Frank O'Connors conception of a short story that deals centrally with loneliness.   The priest and his brother have been planning a joint trip to Jerusalem for a long time.   They are conflicted when it comes time to go because there very elderly mother is very sick.  They both really want to go and they know it may be now or never.  (I am going to tell more of the plot now than I normally do.) Just as they arrive in Jerusalem the priest gets notified that their  mother has passed away.   He ponders what should he do, should he tell his brother who he knows will insist they go home at once.  There is nothing, of course they can do for their mother, there are other family members perfectly able and willing to handle all the arrangements.   I will stop here but you can see their is no "right decision" he can make.

Do you have a favorite Trevor story?

I have a small collection of his short stories, maybe 40, and will, I am hoping, post more on his stories during Irish Short Story Week Year Three in March 2013.

I will next post on a short story by Frank O'Connor.